Don’t worry, it’s not us, but there was drama in the marina this afternoon when a motorboat caught fire. 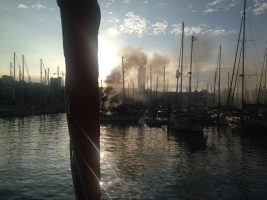 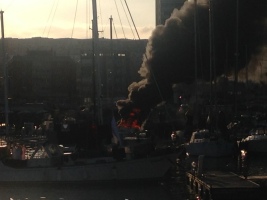 After a productive morning of catching up on schoolwork, our reward was lunch in the restaurant.
Our 3.30pm departure suggests we are adapting to at least one Spanish custom.
Leaving the restaurant shortly before six meant we were a little late for the beach, so an afternoon of rowing round the marina and fishing beckoned … until distracted by a fire a couple of pontoons down. 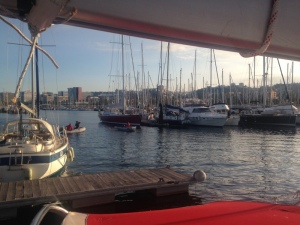 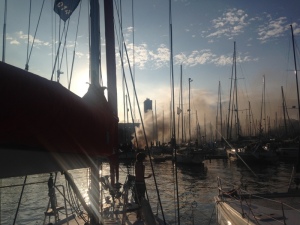 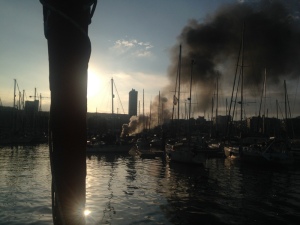 It took the fire brigade sufficient time to arrive before turning up and doing their thing for us to be entertained by:
1) have-a-go pontoon dwellers throwing buckets of water onto the rapidly accelerating fire
2) brave marina staff towing the stricken vessel out and away to eliminate the risk of the fire spreading, nudging it towards the boatyard travel hoist dock, before

3) the eventual arrival of the RNLI (equivalent) who chugged in once the fire was out and the excitement over!

This morning the tender was inflated for a quick trip over to marina reception (it’s a LONG way round on foot) before lunch. Arriving at 13.30 to find the office was closed left us non-plussed since Saturday morning’s opening hours are from 0800 to 1400 … still adapting to Spanish time!

This entry was posted in 2014-2015 a family adventure, Destinations, Life on board, Spain. Bookmark the permalink.