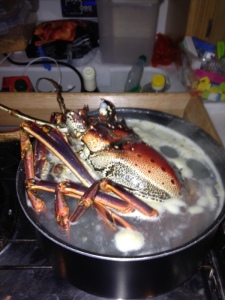 Skippette strikes a monster deal
She always enjoys the thrill of bargaining but when she came back with 100 EC$ (=~£25) for 4 large lobsters the only obstacle was how we could store them in the minibus for half a day before getting back on board.
This was less than half way through our Grenada tourism day – 18 of us (4 families, 8 adults and 10 children) crammed into a minibus to swim under a waterfall, pet monkeys, explore volcanic craters, visit a chocolate factory, a rum distillery, and a local fish and food market – so NOT the right time. By the time we came back 4 hours later after the chocolate and rum the vendor had left but we still wanted lobster for Aretha’s farewell party that evening. 140 EC$ for 17 pounds of lobster was still a great deal.
When we got them home Skippette explained that it was Skipper’s job to sort out the lobsters – kill them and ready them for the pot.
I’d grown up understanding it was either live lobster straight into boiling water OR heating it up in cold water. Now educated in plunging a knife in between their eyes, I set about my task with some apprehension. Four of them were seriously big.
The third lobster was a monster. Seriously huge. It thrashed every time the knife came into contact, eventually only dying when I’d more or less cut it in half.
The others were less challenging, and a short while later we had enough for 4 boats’ worth and there were still leftovers – slightly abashed to confess we simply binned the legs.

This entry was posted in 2014-2015 a family adventure, Caribbean, Destinations, Life on board. Bookmark the permalink.