“Sorry about the weather!”

Spot Khujada 2? Berthed in Sixhaven, Amsterdam (taken from ferry over the canal to the city centre)

“Welcome to Amsterdam … sorry about the weather.” The greeting of our neighbour on arrival in Sixhaven at ~1100 on Tuesday 9th August. Worthy of note if only because for British boats it’s typically more of an accusation than an apology, ie. “What kind of weather have you brought with you?!”

(The photos in our posts tend to show a brighter side to the weather since heavy rain discourages use of digital devices – this post is heavily weighted towards text, but I hope you won’t find it boring just because it’s not got lots of pictures in it and I go on a bit about weather forecasting …).

The apology was graciously accepted if only because the weather we’d not enjoyed from Nieuwpoort to Amsterdam was not forecast. Not by anyone – well, assuredly by someone but not by any of our usual suspects: passageweather.com, meteoconsult, metoffice.gov.uk, metbrief.com/EGRR or the local weather forecast. The local weather forecasts promised either BF 4-5 gusting 6, or 4 gusting 5 for the next 24 hours – what we experienced was predominantly BF 2-4 with occasional squalls up to BF 6-7 (max was 29 knots) with frequent lighting and thunder. So frequent that I counted over a hundred individual lightning strikes in the night, which means we probably experienced in the region of 300? or more? in our near vicinity.

If there’s one thing sailors fear it’s not really strong winds. Big seas are more worrisome, but to be surrounded by massive clouds full to the brim with massive electrostatic charges desperate for their opportunity to climb down our mast and rigging to destroy all our electronics and circuits – or worse – is a different scale altogether. I’ve been more scared on a boat because of inexperience but I’m not sure I’ve been more worried.

At the risk of labouring the weather forecast inaccuracy point, you should understand that we not only consult weather forecasts (in this case, UK, Belgian and French) but we also review the data they are based on, both gribs and surface pressure forecasts (from which the gribs are built, and which constitute a representation of the numerical models used by meteorological services). We do this every time we sail, even if just across the Solent from Haslar to Priory Bay (less than an hour’s sail).

Nothing in the weather forecasts suggested the 3-4 hour storm we experienced.

When we left Nieuwpoort it was supposed to be BF 4-5 so we put a reef in the mainsail only to get a consistent 10 knots on the beam, no more. It was soon removed.

The only weather change likely from the synoptics was a trough due to spill in from the northwest from the meeting of two depressions – we prepared for something like a worst case (ie. working out likely wind speeds from the surface pressure forecasts), not just the 17-18 knots predicted by MeteoConsult (theirs was the maximum forecast), but ready for up to 25-30 knots, including some margin for local effects. Unlike our trip up from Dieppe to Boulogne where we had a fairly constant 22-24 knots (BF6) with the occasional gust into BF7 – we don’t mind stronger winds if they’re consistent, here we were dead downwind in 6-10 knots – simply not enough to push us forwards with the occasional foray into 12-13 knots – good enough with a parasailor but given the distance we were undertaking we were unwilling to compromise on speed so the engine stayed on after the first few efforts poling out the genoa and finding 5 knots tough to achieve.

Night came. Dark, overcast with no moon. We’d got one hour into our watch system when the off-watch was woken to get to the helm to see a massive orange blob on the radar indicating a big squall (a very large cloud very full of rain), its leading edge just half to three quarters of a mile off our port quarter, now too close to steer out of the way of – sailing boat escaping large squall equals toddler crossing busy motorway equals human trying to outrun tiger – you get my drift.

We had two reefs in the sail already, an attempt to reduce the flapping as the centred boom swung from side to side in the light winds with the movement of the boat motoring over the  waves from astern. Skippette decided to take a third reef before the wind in front of the cloud hit us, passing me the helm and moving to the winches. We were half way through the manoeuvre when the rain and wind hit – suddenly and hard. We swapped positions as I shook off my sleep and completed the third reef as Skippette, now back at the helm, bore the brunt of driving hail so dense as to make you feel almost as if you’re drowning, and as we bore away the rain’s density forced her back inside to dry off, drenched in spite of her oilskins.

Two hours later there were four massive squalls almost surrounding us, hemming us in against the coast. When I say massive, two of them were upwards of two miles across.
Lightning everywhere, astern, to port, to starboard abeam, anywhere you like. Thunder deafening. Ours easily the highest mast around (highest = most likely to be struck) since we were the only yacht for miles. We considered running to Scheveningen for shelter – about half an hour to the east but thought better of it – harbour entrance likely to be quite dangerous and no guarantee that clouds wouldn’t simply overtake us as we approached the shore – so steered a course to avoid their respective paths and got away with it. (Note to landlubbers – yachts equipped with good radar can track squalls – they have so much energy in them they reflect a good radar signal as strong as any container ship).

The storm passed over land and its spectacular natural fireworks display continued as it hammered Rotterdam, Scheveningen (yes, we would have been overtaken), The Hague and Amsterdam as we completed the last stretch before arriving at the Dutch coastline. 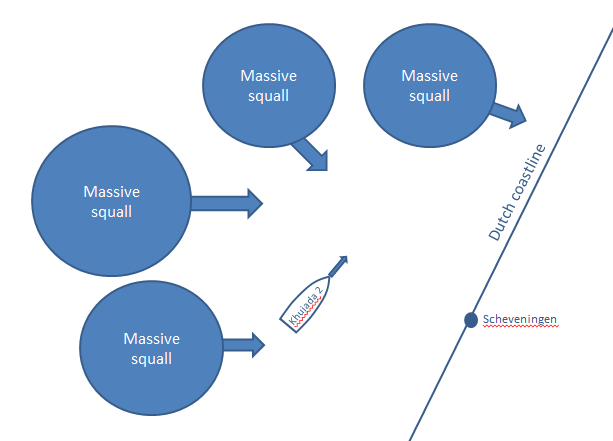 Tired, wet, but relieved and even elated we rolled into IJmuiden on onshore seas and into our first Dutch lock, and then on into the peace of the Nordseekanal. Not that the rain let up, nor the gusts, all the way into Amsterdam. Not a fun sail.

Rain lets up for a moment on the Nordseekanal

This entry was posted in 2016 Solent to IJsselmeer, Amsterdam. Bookmark the permalink.

1 Response to “Sorry about the weather!”