The plan WAS to go from Oeiras (near Lisbon) to Porto Santo and Madeira before dropping down to Tenerife and arriving in Gran Canaria to pick up the children’s schoolbooks.

Parental stress from a month late starting term changed all that so we set a course straight for Las Palmas (not EVEN stopping at Tenerife to pick up our replacement battery charger!) with northerlies forecast to last the week.

Almost ideal conditions spoilt only by confused seas pushed us quickly, if uncomfortably, southwards – waves of anywhere from 1.5 to 4 (on odd occasions) metres from NNW through N round to NE made a heading without rolling and yawing impossible. 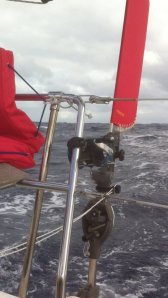 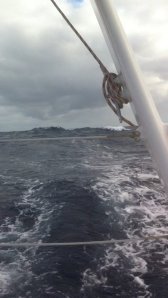 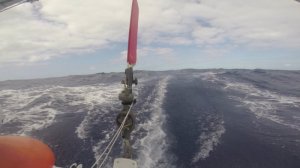 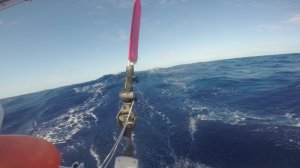 We flew our Parasailor in earnest for the first time, tested the Hydrovane which performed reasonably given the sea state, and lost some fishing tackle as we surfed down following seas at up to 12-13 knots on one dark night – not that we needed it, since the boat was doing better catching a flying fish and a squid using just its deck.

The whole crew adapted well to the rhythm of life on board with its ups and downs, and arrived in pretty decent shape five days later … only to have to wait an hour or so for marina reception to finish their siesta!

Stern-to mooring was another first as we squeezed into more of a crevice than a berth – all fenders out. 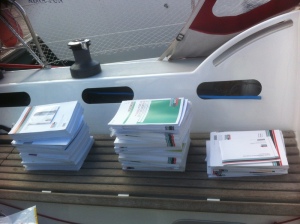 This entry was posted in 2014-2015 a family adventure, Destinations, le bateau, Life on board, Portugal, Spain and tagged Gran Canaria. Bookmark the permalink.